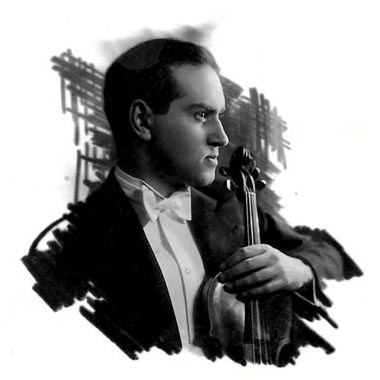 David Oïstrakh was one of the supreme violinists of our era. For me it's this simple: in terms of originality of sound, instrumental mastery, force of musical personality, there is the young Yehudi Menuhin and there is David Oïstrakh, and after that, all the others, who can as a matter of fact be counted on the fingers of two hands. Just as with the voice, there is in the nature of the violin an element of mythical, if not mystical, resonance which accounts for the fact that there exists a radical demarcation line between an extraordinarily limited number of very "great" violinists, unanimously recognised as such, and a quantity of admirable virtuosi of lesser vintage. That demarcation line hangs on a single word: sound, for indeed it is sound which immediately distinguishes the '"great" violinist. There is an unmistakeable Oïstrakh sound, just as much as there is a Menuhin, Heifetz or Milstein sound - as there was a Kreisler or Ysaÿe sound in a previous era - to the point that it is instantly recognisable, should the bow of any one of these magnificent masters set into vibration a simple open string. It is they who have marked the history of the violin in the 20th century. With the exception of Ysaÿe and Kreisler, they are all of Russian Jewish origin, but David Oïstrakh is the only one about whom one can say that he was a Soviet artist.

The fascination which he exerted on me goes back to my childhood, and after having attended a great many of his concerts, I got to know him briefly at the end of his life.

It is therefore no wonder, considering my affinity with Russia, if I have for a long time born in my mind the project of a film about David Oïstrakh. Carrying it out was in fact the result of an extravagantly long process, which began in Moscow as early as 1979. At the start it involved a wide-ranging research (which would later on cover the whole world) of documents whose existence I only suspected. The Soviet world was still a very suspicious and closed one then; however, a good deal of obstinacy and my personal connections enabled me to find the secret doors of a bureaucratic labyrinth which led the way to a vault of treasures, in regard to which its custodians were either completely ignorant, or toward which they showed not the slightest interest. This is how, over a period of many years, I was finally able to gather a mass of documents destined to feed this portrait. 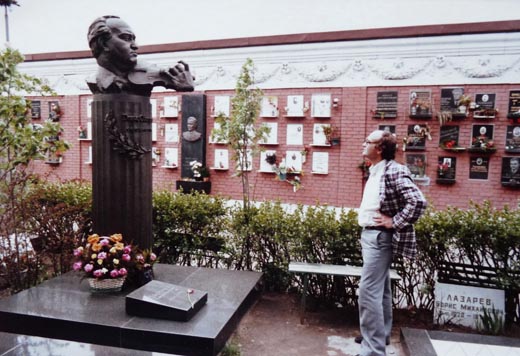 
Born in 1908, David Oïstrakh lived through the troubled years which preceded and followed the October Revolution, years of starvation, war and terror. As if it provided him with some kind of personal refuge, his art, intense but serene, did not seem to be affected, even though he did have to wait a long time for international recognition which was delayed by the second world-war and the political circumstances of the post-war period. Ferociously exploited by the regime, this great man remained silent, abandoning his mighty eloquence to the sole voice of his violin. But the man who had always been silent also had his very own voice which no doubt would eventually sound, if I made use, as I intended to, of his huge correspondance in which he revealed himself so different a person from the one who was compelled to speak the conventional words, to perform the stiff role, to don the official clothes imposed upon him.

It was here that the great mystery lay; how was it that this tremendous artist and this generous man came to emerge, and then managed to maintain himself until the end at such a level of confounding perfection, while having constantly to put up with terrifying pressures to which the art of his peers in the west would, without any doubt, have succumbed?

The public in Russia were not sparing in their gratitude, recognising in him, in the middle of an essentially inhuman and corrupt world, something pure. In this ruthless regime, relying on horror and persecution, man could sometimes turn the most terrible into the most wonderful.

Such were the dilemna which were going to supply the film I intended to make with its dramatic tenor. All in all, I would endeavour to construct it along some biographical elements, to which I would give a sense of chronological continuity by illustrating them with the substantial - albeit at times despairingly fragmented - archival documents I had been able to unearth, interwoven with the following series of principal and subsidiary thematic ideas:

I - What is a "great" violinist?
This theme would be adressed through the testimony of another "great" violinist of the century, Yehudi Menuhin, who had known Oïstrakh in Moscow since 1945, and was bound to him by one of those deep professional and human friendships, so rare in a musical world otherwise characterised by ferocious rivalry.

II - David Oïstrakh, "Homo Sovieticus".
How had Oïstrakh's talent, the peerless perfection of his technique and of his style, been able to blossom in a society built on such improbable constraints and privations? Did music provide a refuge? What was there behind that silent and good-natured personality? In order to bring an element of response to these questions, I would edit my film in a polyphonic way so as to draw a parallel between some of the violinist's private correspondance and certain official texts he had published, between the lines of which one could detect the occasional signs of real courage, signs which give an idea, if not of dissidence, at least of a personal drama, intensely and permanently felt. The sarcastic verve of Mstislav Rostropovitch and Gennadi Rozhdestvensky, two artists torn between their loyalty towards Russia and their rejection of the system, who belonged to a generation younger than Oïstrakh's, but had often appeared at his side, would surely be of priceless value here.

III - The private man.
Who else could I better cast here than his own son, Igor, himself a first-rate violinist? His contribution would be illustrated by the vast amount of photographic and sound family archival material, as well as by a few brief sequences filmed by Oïstrakh himself with his small amateur camera, which I had dug up.

IV - The teacher.
David Oïstrakh, who had studied in Odessa with Piotr Stoliarsky, was part of the long tradition of the Russian violin school. He, in turn, had become the true founder of the Soviet school which would ultimately astound the musical world by sending its best representatives to prestigious international violin competitions abroad. Gidon Kremer, Oïstrakh's most brilliant disciple, would let us share his experience of being taught by the master. 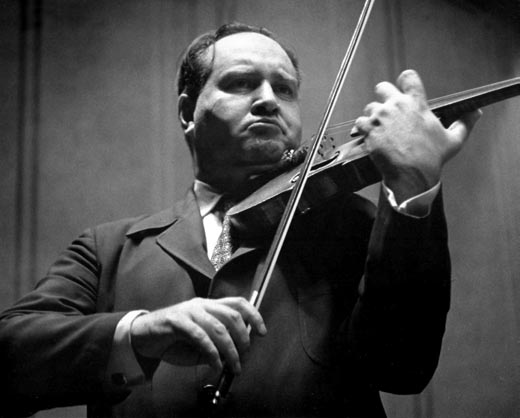 Oïstrakh's playing was not so much marked by brilliance than by lyricism, plenitude, roundness of sound; by the unbelievable bite of his bowing , its sharpness and clarity; his ability to draw long bows on even the shortest of notes without the slightest tension; his beautifully fleshy, supple left hand with its glorious vibrato capable of an infinite variety of shades. In the documents of diverse periods and origins on which I had laid hands and which I intended to use, one was struck by the almost tangible contradiction between the massive physical appearance of the man and the surprisingly nostalgic quality of the sound he produced. It was certainly that which I would attempt to render perceptible: the discovery of the secret man through the magnitude of the musician.

I know several types of great violinists: some are the wonderful but unimaginative calculators, who play for the sake of effect, a splendid effect admittedly, yet each time reproduced in the same perfectly predictable way. Others, who abandon themselves to the fantasy of the moment and who, for lack of discipline, indulge in purely whimsical self-utterances. And then, there are those who succeed in striking an ideal balance between the utterly predictable and the utterly abandonned, between rigor and freedom. David Oïstrakh was the incandescent model of the latter type, the very example of purity and of musical integrity.

Bruno Monsaingeon
about « David Oïstrakh, Artist of the people ? »